The document has moved here.

We are authorized dealers of the best manufacturers:

Who are our customers?

Why do people love us?

Take a look at the video walkthrough Ben from Exalt gave us of their truly awesome Barrel Maid.


Features:
Barrel Buffer – Won’t unravel, easy to wash, cleans like a champ.
Rocket Disk – Something you’ve never seen before. All-weather seal retracts during insertion to prevent paint going up your barrel, then expands as you pull back to remove everything in it’s way.
Molded Shaft – Not built on a twig, this beast of squeegee is forged out of tough & flexible plastic.
All pieces are 100% interchangeable and 100% replaceable.

We have these in stock, with free shipping as always!:
http://store.aimhard.com/Exalt-Paintball-Barrel-Maid-Click-a-Color/dp/B00BOGX9AM
Empire's new Vanquish Paintball Gun!

Empire Launched no less than 5 guns this week, but the one getting the most attention is Vanquish.


A photo of the display at Paintball Extravaganza: 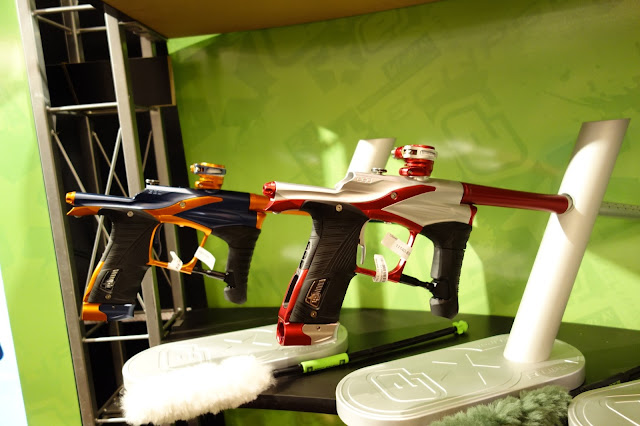 It'll ship in 6 colors in April 2013, and brings massively improved efficiency and noise to the Ego product line which was never known for either of those qualities.

I'm excited to try this gun!

pre-order it on our webstore , you'll get our first batch which is expected on April 1st 2013.

This newest marker comes with a new aluminum (not cheap nylon or plastic) trigger frame called the "Stinger". This sleek low pressure frame provides direct through-the-grip air to the gun without the usual ASA to gun hose. The Wave trigger itself is also aluminum and has a magnetic breakaway system and allows for 3-axis adjustments.

Additionally the gun comes with a 7 stationary O-ring Riptide regulator to take the pressure down to the internal operating pressure of an efficient low pressure (just 180 psi) that runs the efficient subsonic bolt engine that has a multi ported concave front.

To top it all off the G5 has a low profile clamping feedneck.

The G5 comes in six colors - Black, Brown, Silver, Red, Blue and Green. It is a beautiful addition to the Dangerous Power product line.